Metal Gear Rising: Revengeance (Japanese: メタルギア ライジング リベンジェンス Hepburn: Metaru Gia Raijingu: Ribenjensu?) is an upcoming action video game being developed by Platinum Games and produced by Kojima Productions, for the PlayStation 3 and Xbox 360[1][8] consoles. It will be the ninth game in the Metal Gear series, with a plot set four years after the events of Metal Gear Solid 4: Guns of the Patriots. The story will focus on the cyborg ninja, Raiden, in a fight against a private military company known as Desperado Enterprises.[9] Although a Japanese release for the Xbox 360 platform was planned, that version was cancelled.[7]

The game was originally announced in 2009 under the title of Metal Gear Solid: Rising, and was intended to act as an interquel between the events of Metal Gear Solid 2: Sons of Liberty and Metal Gear Solid 4: Guns of the Patriots. This form of the game was to be produced solely by Kojima Productions.[10][11]However, the Kojima Productions team met with difficulties in developing a game based on swordplay, so the franchise director Hideo Kojima cancelled it. A solution was found, in late 2011, with Platinum Games taking over development. Under the guidance of the new team, Metal Gear Rising: Revengeance was revealed, with a significant change in gameplay. The game’s setting was changed to give Platinum more creative freedom. Kojima Productions retained responsibility for the game’s overall plot and Raiden’s design.[12]

Players assume control of cyborg ninja Raiden, the katana-wielding ally of series mainstay, Solid Snake. He is initially playable in his “White” form, which was based on his appearance in Guns of the Patriots, where he is depicted as wearing white armor. At some point in the game he switches to the more powerful “Black” cyborg armor variant which draws extra energy from “Zan-Datsu”(斬奪) kills.[13] Unlike previous titles in the Metal Gear series, where players try not to be noticed by enemy, Rising is action oriented, focusing on swordfighting and a sophisticated cutting system to fight and defeat enemies. Although Raiden’s main weapon will be his high-frequency blade, he will also have “sub-weapons.” Raiden can wield blades such as a dagger as well as a rocket launcher.[14][15]

The game’s cutting system allows players to engage in melee combat, as well as to precisely slash enemies and objects at will along a geometrical plane using a “free slicing” mode. Virtually any object in the game can be cut, including vehicles and enemies, though elements of the environment were intentionally limited to structures such as pillars and walls to better facilitate gameplay.[16] The free slicing mode, named Blade Mode, produces a special targeting reticule in the form of a transparent blue plane which can be rotated and moved, tracing orange lines across the surfaces of objects to indicate exactly where they will be cut; it can also be used to enter a bullet time state, giving players the opportunity to precisely slash targets during moments of action, such as slicing through a falling target from multiple angles before it hits the ground. These features can be employed strategically, for example disabling opponents, finding weak points and gaps in armor, severing support columns to collapse ceilings or walls onto enemies, deflecting enemy fire, or cutting through objects to remove enemy cover.[17][18] However, entering into Blade Mode reduces Raiden’s energy to the point that if dropped to a certain level, it cannot be used.[19]

Raiden will have the ability to parry attacks even when his back is turned,[14] allowing him to counterattack enemies and perform multiple combos.[15] The player also has access to a stealth mode called “Ninja Dash” which drastically increases Raiden’s speed and allows him to climb certain areas. This allows him to strategically ambush an enemy rather than fighting head to head.[15] Another key gameplay feature is called zan-datsu (斬奪?, lit. “cut and take”), and involves “cutting” through enemies and “taking” parts, energy, ammunition, items, and information from the bodies of dismembered cyborgs and robots.[17][18][20] This maneuver can be employed when attacking an enemy during Blade Mode and helps Raiden gain energy.[19] When completing a mission, the player will be rewarded with a specific amount of points depending on his or her performance and will receive a grade, with the highest being “S”. These points allow them to buy upgrades for Raiden’s equipment.[21] Some weapons can only be obtained by defeating boss characters.[22]

The franchise’s stealth elements remain in the form of gathering reconnaissance using a visor. Through this, the player can verify the areas and proceed to the objective avoiding contact with enemies.[23]Camouflage through a cardboard box makes sneaking easier for Raiden.[24] Being spotted by an enemy triggers the “Alert Mode”, in which Raiden is assaulted by multiple enemies for a determined time.[23]The player also gains assistance from Bladewolf, a dog-like machine that gathers map information for Raiden.[25]

The game takes place in 2018, four years after the events of Guns of the Patriots.[26] The protagonist is Raiden, a cyborg working for the PMC Maverick Enterprises in order to raise money for his family.[25] Developers stated that while Raiden “has grown up” in comparison to previous Metal Gear games, he is still conflicted with his life as a child soldier in Liberia, leading him to be a “dark hero”[3] who “grow[s] as a character and develop[s] as a person”.[27] He is assisted by members from Maverick Security including a Russian pointman named Boris (ボリス Borisu?) who communicates with him through Codec.[23] He is accompanied by Kevin Washington, a military advisor, Courtney Collin, a data analyst, and Doktor (ドクトル?), a maintenance expert responsible for Raiden’s new body.[28] Returning from Guns of the Patriots is Sunny,[26] where she will act as a “secret character.”

Members of a rival PMC, Desperado Enterprises, are the main antagonists. One of its operatives, Samuel Rodriguez (サムエル・ホドリゲス Samueru Hodorigesu?) serves as Raiden’s rival with a conversation between the two in the beginning influencing Raiden.[29] Rodriguez is assisted by a trio called the “Winds of Destruction”. They comprise Desperado’s virtual leader Sundowner (サンダウナー Sandauna?), an advanced cyborg swordfighter,[30] Mistral (ミストラル Misutoraru?), a female cyborg possessing multiple arms and wields a whip-like weapon,[31] and Monsoon (モンスーン?), a ninja with segmented body parts.[32] A quadruped robot named LQ-84i, known also as Wolf, will play an important role in the plot as Raiden’s enemy and eventual ally.[25][33] In addition, a “leaked conversation” uploaded on one of the viral marketing sites for Rising, “waronourshores.com,” implied that a Colorado senator and potential Presidential candidate, Steven Armstrong, was heavily involved in Desperado’s activities.[34] The game is a spin-off that is “not part of the Metal Gear Solid series”, although it is considered part of the same universe, and thus “canon”.[12][16] 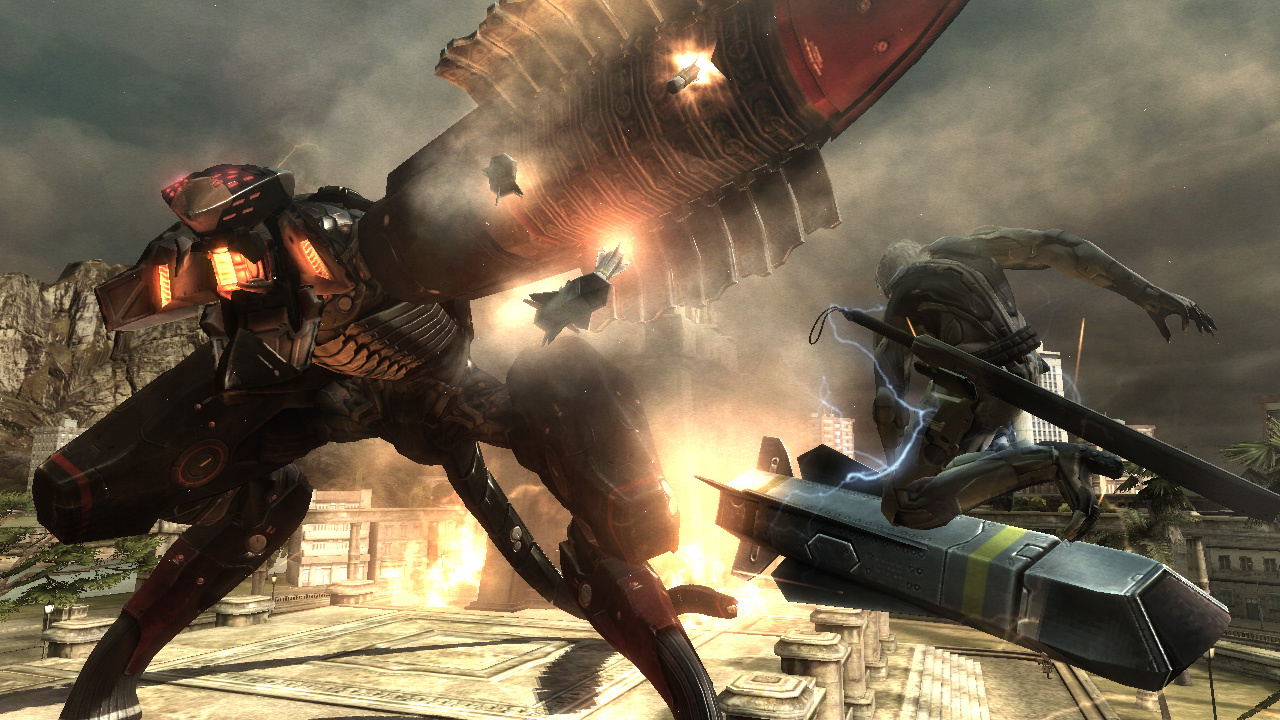