F1 Race Stars is a video game developed by Codemasters, released in November 2012.[1] It is a kart racing game loosely based on the 2012 Formula One season, with circuits redesigned to feature loops, jumps and short-cuts.[2] It is a spin-off from the traditional Formula One video games, and is the first kart-racing game developed by Codemasters. The player is able to choose cartoonish versions of Formula One racing drivers, such as World Champion Sebastian Vettel, Lewis Hamilton and Fernando Alonso.[4] It was announced on 13 July 2012 at the San Diego Comic-Con International.[3] Codemasters have described the game as being designed to emphasise entertainment rather than simulation.[5] On 6 December 2012 it was confirmed to be coming to Wii U.[6]

All 12 teams and 24 drivers that started the 2012 Formula One season appear as playable characters, along with two additional fictional teams – one, TecNova-Star, with two female drivers, Ruby Power and Jessica Chekker and another, Satsu-Aceler, with male driver Josh Merit and female driver Kira Hoshihara.[7] There are 11 circuits to choose from by default, each based on one of the 20 rounds of the season, but with modifications to suit the gameplay (some parts of the Abu Dhabi GP, for example, are styled like a rollercoaster). Additional courses and other content are available as fee-based downloads.[8] Each track contains a KERS system around corners and Item Boxes where players can pick up weapons. Getting hit by weapons damages your car which leads to the driver needing to make a pit stop to maintain top speed. 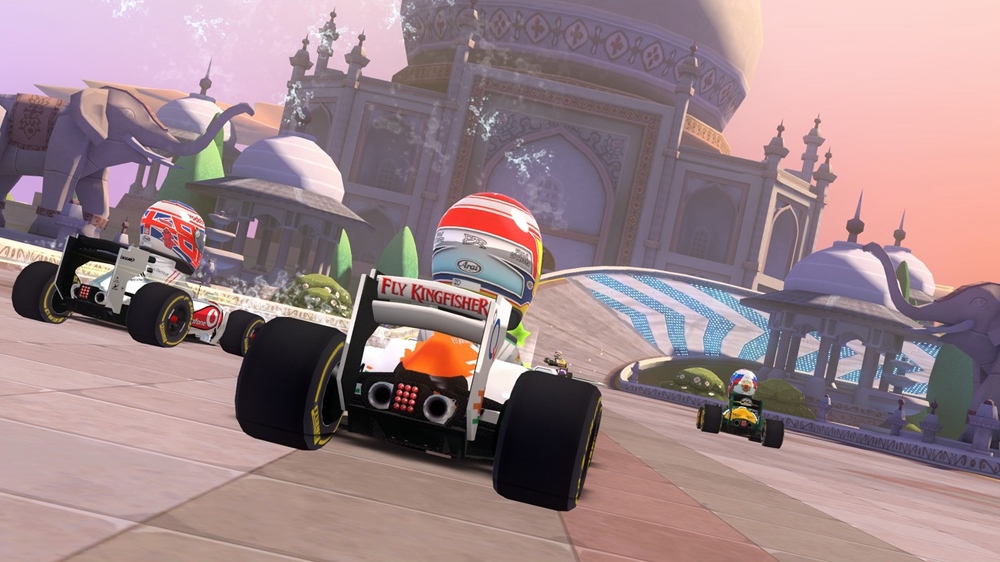